Cryptocurrencies are essentially software, but a very very clever variant of it that uses complex mathematical methods, computing power, and cryptography. Every piece of software can always be improved, which is why crypto blockchain codes continue to be written – and Ethereum is about to get a big update. Through this update, ETH 2.0 – the second-largest cryptocurrency by market capitalization – is supposed to become faster, cheaper, and more reliable.

Ethereum ETH has been a game-changer in the cryptocurrency market since its emergence in July 2015. ETH is indisputably the second largest cryptocurrency and has become an essential part of the crypto world. However, Ethereum’s blockchain, much like Bitcoin’s, is slowly approaching the limit of its capabilities. While Bitcoin is trying to solve its scaling problem with the lightning network, Ethereum does not want to simply graft on a second-layer solution, but rather venture a complete reboot of its blockchain: Ethereum 2.0.

ETH 2.0 is an ambitious project that will not only take years to complete, but could also impact existing smart contracts. But how will this change actually work? And what changes will even be made? In this article, we’ll take a look at what the future holds for Ethereum.

DeFi Pushes Ethereum to Its Limits

Ethereum’s success is based on what are known as smart contracts. In simplified terms, these allow agreements to be made between two or more parties. The conditions of such an agreement are part of the information stored and are usually executed automatically. This enables, for example, a decentralized exchange such as Uniswap to be operated directly on the blockchain.

The disadvantage, however, is that each of the agreements – along with all the executions that belong to each agreement – must find its way onto the blockchain. In 2020, this sometimes led to horrendous transaction fees. This is because, with the hype of Decentralized Finance (DeFi), such as in the form of a type of loan agreement or a decentralized order book exchange, many more people suddenly wanted to interact with the Ethereum blockchain. Since it can only handle a certain number of requests, users had to live with the fact that, suddenly, interacting with DeFi became extremely expensive.

This has already been a known problem and the debate on how to address it has also been going on in the Ethereum community for quite some time. The DeFi hype simply reminded all Ethereum users that the Ethereum blockchain simply cannot scale any further.

Proof-of-Stake Becomes Part of the Solution

Part of the solution to this problem is to move to proof-of-stake. In its current form, Ethereum relies on proof-of-work, which relies on the processing power of miners. This not only consumes a lot of energy, but also further limits the number of transactions. With proof-of-stake, an alternative consensus mechanism comes into play, in which the computing power no longer plays a role, but rather the share of Ethereum that the participants deposit as collateral (staking).

Anyone who wants to verify transactions in Ethereum 2.0 acts as what is referred to as a validator. To become a validator, you need a continuously running network node or server, the publicly available software, and a total of 32 ETH. These 32 ETH serve as a security deposit. A validator uses their money to vote together with other validators to ensure the validity of transactions in the network.

The reasoning behind this is so that a stakeholder has a natural incentive for confirming transactions truthfully. If they were to act manipulatively, they would ultimately damage their investment, which would not be in their interest. In order to prevent a validator from acting maliciously or irrationally, there are mechanisms that force them to be honest; otherwise, they could potentially lose the ETH they’ve invested.

In return, a validator receives a reward that is allocated to them when they confirm a transaction. This is therefore very similar to mining, although a return on investment is calculated quite typically for staking, which is around 18% per year for ETH2.

But proof-of-stake is only part of the solution because transaction throughput is limited here as well. It is simply not possible to increase it arbitrarily because every validator still has to track all transactions. At the same time, however, Ethereum wants to make it accessible and usable for an ever-growing number of people and devices. While there is only one blockchain in the current version of Ethereum that has to handle all requests and transactions, Ethereum 2.0 wants to link several blockchains with each other. 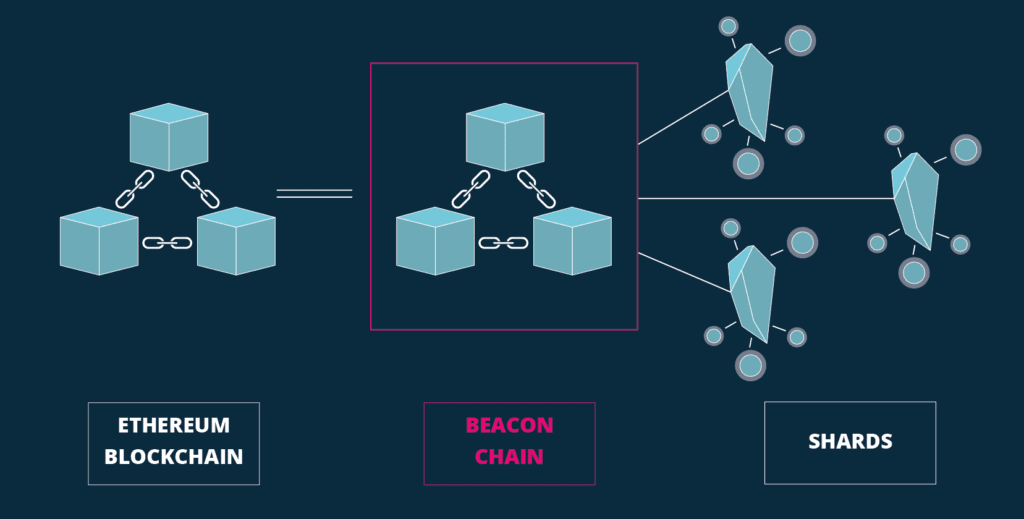 This link is known as sharding and each of these blockchains is referred to as a shard. Currently, a total of 64 of these shards are planned to be developed and partially released in the course of 2021. The advantage of this solution is that certain interactions can be handled on a shard and the actual Ethereum blockchain is only needed to record the status of things and finalize agreements.

As you can easily see from these many different development steps, Ethereum 2.0 is a pretty extensive project. In addition to the planning, which already spanned throughout all of 2019, the so-called Beacon Chain was given the go-ahead on December 1st, 2020. The prerequisite for its launch was finding at least 16,384 validators who would transfer a total of 524,288 ETH to the ETH2 smart contract.

The Beacon Chain starts by introducing staking and will change as Ethereum 2.0 develops. For example, it cannot handle smart contracts, but is used to introduce shards and staking. The old blockchain still needs to be merged via sharding and the first shards are expected in 2021.

Finally, smart contracts will also become part of Ethereum 2.0. However, the so-called “Ethereum Virtual Machine” will have to be polished before that. Therefore, Ethereum 2.0 will remain a hot topic in the coming years even after the Beacon Chain launches – it will be interesting to observe how the planned developments unfold.

Conclusion: ETH Will Remain ETH, Be Technically Improved, and Be Ready for the Future

It is worth noting that for the average Ethereum user, nothing will change on the surface. Ethereum will stay Ethereum – even in the BISON app. The changes that will take place involve the technical foundations of the ETH blockchain, i.e. the infrastructure that executes, verifies, and documents transactions. New processes will be used to enhance the ETH blockchain – making it faster, cheaper, and more reliable.

© 2022 EUWAX Aktiengesellschaft
-
Hinweis gemäß § 36 Verbraucherstreitbeilegungsgesetz (VSBG): Die EUWAX Aktiengesellschaft wird nicht an einem Streitbeilegungsverfahren vor einer Verbraucherschlichtungsstelle im Sinne des VSBG teilnehmen und ist hierzu auch nicht verpflichtet.
Manage Cookie Consent
We use cookies and other related technologies to ensure that our
website and its services are accessible, user-friendly, and can be
continuously improved upon. While "necessary cookies" are required for
the use of our website, all other cookies are used to help us optimize and
further develop our services, thereby ensuring their economic operation.
We only use non-essential cookies if you explicitly consent to them. You
can express your consent by clicking on "Accept all cookies" or by
agreeing to a particular use of cookies. Your consent to our use of
cookies can be revoked at any time for future visits to our website; the
settings can also be modified at a later point in time.
We would also like to state that by using this website, your data will also
be collected and processed by US companies. If you are in agreement
with this, click on “Accept all cookies”. By doing so, you are consenting
to the transfer and processing of your data to third-party countries, such
as the USA, in accordance with article 49 (1), sentence 1a) of the
General Data Protection Regulation (GDPR). More information about
transfers to third-party countries can be found in our privacy policy